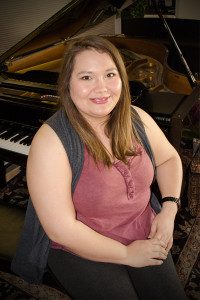 Michaela Hyde was born and raised in central Phoenix and has been a part of Music Works Community since she was five years old. She studied piano with Carolyn Inabinet for 13 years.  Miss Hyde annually participated  in the Phoenix Music Teacher’s Association (PMTA) Fall Festival and Piano Ensemble as well as the National Guild Auditions from age eight.

During  high school, Michaela served as a lab monitor at MWC in addition  to working at Premier Ear Nose and Throat. She graduated from Phoenix Christian High School as salutatorian in 2012.  Miss Hyde considered careers other than music and was heavily pursued by some of the top universities in the country.  During the fall semester of her senior year in high school, she realized that her true joy was music and being a part of  Music Works .  “It was as I was preparing myself for the reality of leaving that I realized that I would have grand success at the expense of giving up something I truly loved.  I decided at the end of the day I would rather be happy and teaching my students and watching them succeed is my happiness.”

Currently, Miss Hyde is pursuing her Certificate of Completion in Beginning and Intermediate Piano Pedagogy from Mesa Community College. She attended Arizona State University as a Provost Scholar for her academic achievement and was also awarded a Talent Scholarship from the School of Music. She studied with Caio Pagano at ASU while working toward  her BA of Music at the ASU Herberger School of Music.   She is member of MTNA, ASMTA and PMTA,  serves on the Ensemble Committee with PMTA as well as a member of the National Guild of Piano Teachers.

Back to Instructor Page