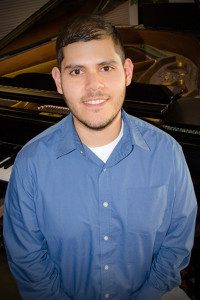 Francisco Naranjo graduated Magna Cum Laude from Northern Arizona University (NAU) in 2012.  He received a Bachelor’s of Music Education Degree with emphasis in solo piano and tuba. During his time at NAU, Francisco participated in various performance groups including piano ensemble, concert band, marching band, and choir. His passion for music and traveling led him to travel throughout Europe where he had the opportunity to study Spanish music at the University of Granada in Granada, Spain.  In addition, he participated in the Chinese Music and Culture program at the Shenyang Conservatory of Music in Shenyang, China after returning from Spain.

Having been a student in the annual PMTA Piano Ensemble as a student of Carolyn Inabinet, he now serves as a conductor in this yearly event.

Back to Instructors Page